Brothers Kjell and Stig Johansson had previously broken the turf on Pinnamyr ago 1957. They started the business in family farm and dug up peat blocks with spade. Since its inception, it's only block peat produced.

Around 1960 went over to dig up all the machine. Initially sold peat with wood packing around. Later bought a carousel packed shredded peat in plastic bags. They leased more land to farmers in the area and even bought more moors themselves. Locomotives and Coots were used to salvage the home harvest to storage buildings at the plant.

Fr o m, 1989 running instead into the peat by tractor and trailer.

Year 2000 Dan Johansson took over the business in Söftesmåla.

Under 2007-2008 the company purchased approximately 25 hectares of marsh and got more raw material and an extended quarry permit is valid until, 2038. It has invested in a modern factory with new packing machine. The premises are heated, and the new 300 liter bag adapted to EUR pallet formats, making transportation more efficient. With the new factory, a worker handle packet ring and you avoid heavy lifting. 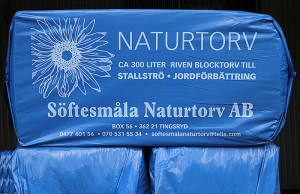